New youth teams for A-League clubs has seen a geographical shift in the distribution of Australia’s young talent, but Marconi Stallions is demonstrating it is possible for existing NPL clubs to produce quality young footballers.

In the recent 23-player Joeys squad named by Tony Vidmar for the AFF U15 Championship, just eight footballers came from teams outside the A-League, and half of these were Marconi players.

That is an equal-largest representation in personnel from a single club within a national team (Sydney FC and Western Sydney Wanderers also contributed four players to the squad). It matches the four Joeys selected from Marconi in 2017, as well as two selected in 2016, highlighting ongoing success from Marconi’s youth program. Similarly impressive, two players in the last three years have represented the Young Socceroos.

The club’s Technical Director, James Lambert, suggests that an emphasis on individual development within a clear team model and style of play is fundamental to this success.

Lambert and Program Coordinator Klaus Okon have ensured the club has consistency across all teams in not only style of play, but coaching delivery, session design and matchday approach. Lambert firmly believes that the Marconi program is “evidence that sticking to a process has successful outcomes”, but emphasises that this is a six-year process so far and still ongoing.

Watching a Marconi game, you would get the impression that this process originated from the infamous National Curriculum, equally beloved and beleaguered in youth development programs across Australia. Marconi’s style of play is based upon effective possession, high pressing and clever combination play – three of the key pillars underpinning the desired Australian way of playing.

Lambert believes that Marconi’s clearly defined style of play has particularly paid dividends because of the national shift towards similar playing philosophies. 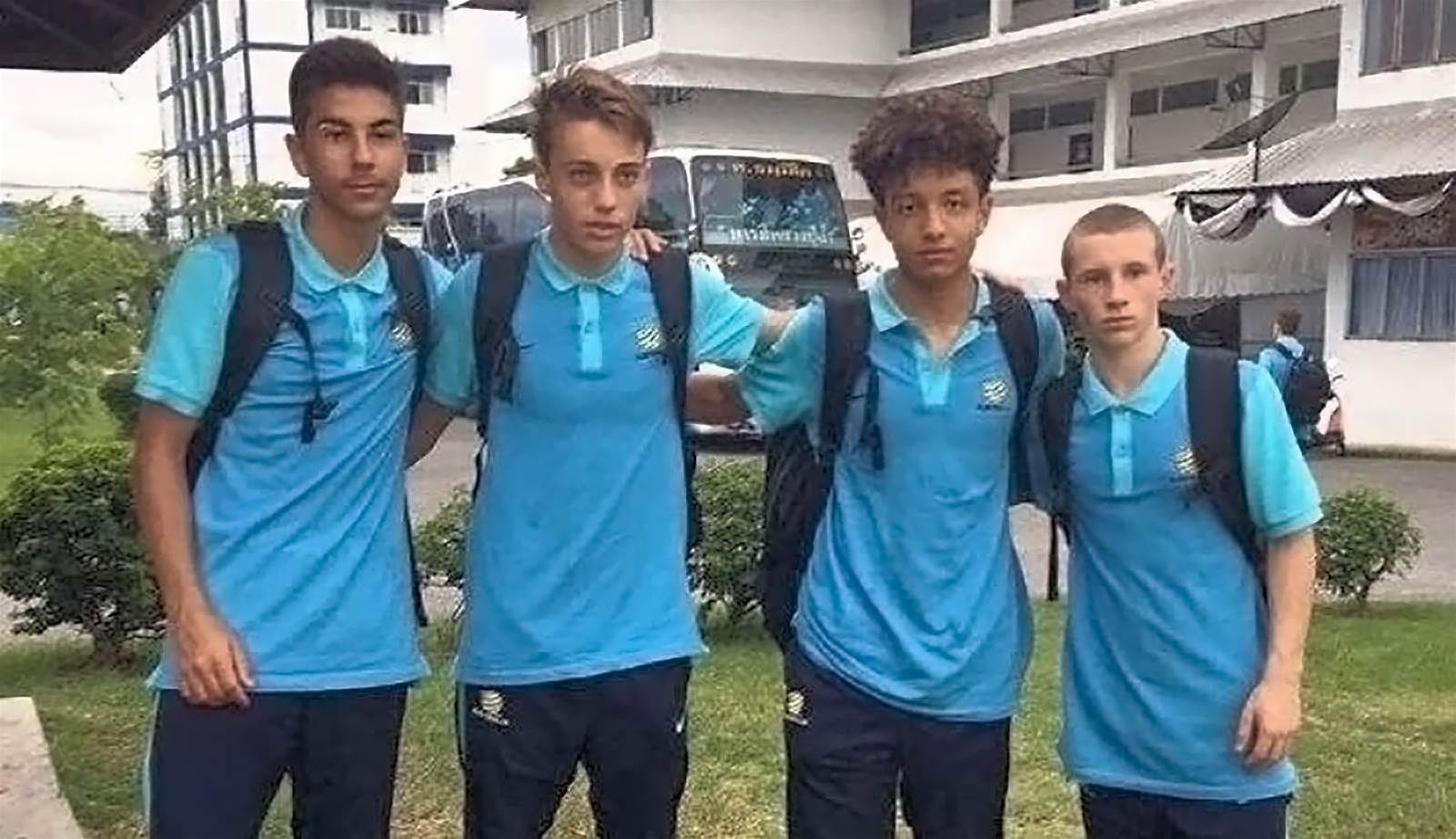 “Marconi players fit into the Joeys, because the Joeys have a similar playing style, but we don’t have this playing style because of that,” he says. “We play this way because the contributing coaching staff have significant experience and history in football, and believe it is the right way to play.”

A common argument against clubs that adhere to a singular way of playing is that it produces cookie-cutter footballers. However, Marconi’s coaches are given freedom to alter the model according to player attributes. While the base formation – a 4-3-3 with one 6 – is always the same, they believe this system allows coaches to create different positional roles that suit the players available. For example, a striker that might prefer receiving passes to feet can be accommodated as a false 9 within the Marconi team model, even if the model suits the profile of a 9 who runs in behind.

We play our way because the contributing coaching staff have significant experience and history in football, and believe it is the right way to play

Accordingly, the coaching staff work hard to utilise a common football language through all their teams to allow this flexibility. “All the players speak the same language, both on and off the pitch. This allows an U13 player to play in the U20s, per se, because they understand what the model looks like and how it works. The difference between age groups is in expectations, not player tasks”.

Furthermore, the language is designed to be simple, drawn directly from the game. The Marconi coaches don’t make football sound complex, but it does just sound logical. This shared language also helps the coaches communicate better, because they have a common understanding. Therefore, between teams they can provide each other with detailed, constructive feedback.

Training also follows a similarly rational approach. Lambert firmly believes that a distinguishing characteristic between Marconi and other clubs is the broadening of the Game Training concept.

Game Training, as presented in the FFA’s Advanced Coaching Courses, focuses upon recreating football problems in training as realistically as possible – including size of the pitch (often half-field) and number of players (14-20). A fundamental problem with this, Marconi believe, is that recreating a ‘football problem’ accurately on such a large scale can take up too much valuable time; limiting the time available for youngsters to play, and in turn, reducing the number of touches on the ball everyone gets during a session.

Instead, there is a strong focus on incorporating this concept in small-area games based around positioning – like the ‘positioning games’ prescribed by the FFA’s coaching process. A critical difference is that the curriculum suggests this training component take up one quarter of a session, whereas in a Marconi session, it can be the exercise of longest duration. This allows players to get more touches, whilst still developing their understanding of the team model.

However, Lambert believes the National Curriculum comes in for unfair criticism. “The Curriculum has helped shape our coaching process and has heavily influenced our approach to training design,” he says. “It has not guided our decision to play the way we do, but it helped reinforce that what we were teaching was the way forward.”

“The Curriculum should be recognised for what it is – a way for coaches to develop a certain type of player and a certain way of playing, which is aligned to the FFA’s long-term vision for Australian football. It is not perfect, but it is a clear roadmap with certain elements to it which we believe we utilise effectively and can provide evidence for their success.”

Lambert also believes that the Curriculum is misunderstood. “From the A Licence onwards, coaches are encouraged to develop their own playing philosophy and coach according to this vision,” he says. “The FFA mandate a certain style of play in the C & B Licence because that allows coach educators to focus on teaching the coaching process. Ultimately, the key takeaway from Australia’s coach development system should be on the coaching process – which we believe we have proven works at Marconi with our unique style of play.”

The Curriculum is not perfect, but it is a clear roadmap with certain elements to it which we believe we utilise effectively and can provide evidence for their success.

What, though, is the Marconi difference? Why have they contributed as much to recent youth national teams as A-League clubs who have the luxury of enlisting the major proportion of the best talent? The coaches agree that the positive learning environment from U13 to U20 is critical.

This environment provides players with video on a broad spectrum of technical/tactical information to support the coaching process. Lambert himself painstakingly pieces together clips from elite football that reflect the desired outcome of each session and each coaching interventions. These clips are annotated, edited and provided both in person and on an online platform for every player to access.

In addition to this, players are expected to digest and reflect on what they are taught through an online forum. Through Q&A, the coaches are able to understand how well each player can articulate what they are learning each week.

The real learning, though, comes in games. This is what the Marconi program consider to be the best learning environment, and therefore, provide lots of feedback to support the players. The feedback provided is always centred upon the model, delivered as close to the moment in which problems occur as possible, so players are able to correct errors and perform the right actions more often in the environment that exactly replicates what the coaches are trying to prepare them for – competitive football.

The coaches view matches as an extension of the training week, and not the pinnacle of it. Therefore, it is not uncommon to hear them speak constantly to their players throughout a game – yet it is always calm, controlled and appropriate to the circumstances of the match.

The basis for the Marconi difference, though, is in the detail. If you listen carefully to the feedback the players are being provided with, you get a real grasp of the game insight the players are being provided with.There is great consideration in the content and delivery of each intervention from a coach – small details about the positioning of a player, where he should move, when he should pause, when he should have a little scan over his shoulder.A Marconi player that can comprehend and bring that attention to detail to life in a game is a player that will achieve their greatest level of success. Accordingly, in these recent youth team selections, there is evidence that this is possible, even in the crowded space of Australian youth development.

There is always much fear-mongering and angry ruminations on the future of Australian football, but Marconi’s youth football program is evidence that time, patience and a focus on learning can produce results.

Tim is a football coach, writer, analyst and sports scientist. He is currently Assistant Technical Director, Head of Player Development & Video and a coach at NWSF Spirit, as well as working with the Pararoos. Previously, he has worked as an analyst with the Socceroos, and in the A-League.